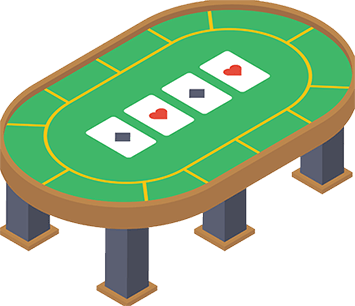 Also appearing as "Texas Hold'Em" poker at some casino sites, this is arguably one of the most popular casino games and certainly, varieties of poker that you can play.

Also, one of the traits that is almost synonymous with James Bond, the game of Texas Holdem is one of the most exciting in the gambling industry.

Poker and indeed, Texas Holdem poker is a game that is more predominantly associated with being a game of skill and strategy than other casino games, though of course, there is also a lot of luck involved as well.

The game has had a long history in Las Vegas and is particularly popular in a number of casinos there, though it wasn't introduced to the resort until 1963 when a man by the name of Corky McCorquodale brought it to the California Club. This was then offered to the Golden Nugget Casino, Stardust Casino, and the Dunes Casino along the strip.

It was in the 1980s though when the game really began to rise in popularity as many flocked to the casinos to play Texas Hold'em which had become a very exciting game to play, particularly compared to other casino games. This is because, it rose to fame following the publishing of a book in 1983 by the author Al Alvarez, which was called 'The Biggest Game In Town', and as a result, the game gathered a huge amount of mass appeal.

Off the back of this publication, it also led to more casinos in Las Vegas offering the game by popular demand, as tourists flocked to the resort to play having read the book and seen why it could be such an exciting casino game to play.

It is also one of those games that is just as popular to play in person with others as it is online because for many it makes for a great social occasion among friends, while there are also hundreds of different casino sites that offer this game and in a lot of different formats.

How to play Texas Hold'Em Poker

If you really understand suits of cards and the values of each one, then it can be particularly easy to learn Texas Hold'Em Poker.

Fundamentally, every player is initially dealt two hands, while three are then placed in the middle of the table (the flop). Following this, every player is then required to bet based on the hand that they can make as well as the cards that they have already been dealt. There are also two other cards to be revealed in the middle of the table (the river), and for some players this is where a lot of speculating takes place.

This also is where the art of bluffing takes place, as players sometimes attempt to force others to fold by betting large amounts on their hand and forcing others out of the game (despite them maybe not even having a hand of any value).

Each betting round, can be particularly tense for players who often can take a while to decide whether their hand is better than their opponents and then analyze their behavior to determine whether they are in fact bluffing. Each round of betting requires players to make a bet every time, unless they 'fold' (throw away their cards) and sacrifice the bets that they have made already.

More often than not, the final betting round (betting on the last card in the river), can be somewhat of a showdown, especially if each player has tried to force the other out of the game. It can often be the case that one or more player is waiting for the same card to be revealed on the river as well to make the same hand, and it could come down to a particular suit or color that makes all the difference.

Once bets have been placed on the final betting round, the player must then show his cards before the last card is revealed. The player with the best hand according to the cards in the middle of the table wins the money that has been wagered in each betting round up to that point.

On each betting round, a player has the opportunity to either bet or raise as well as 'check' which means no bet. A player can only choose to 'check' though if no other has done so already, otherwise, they must bet at least the amount that has been wagered so far in the round.

Before you play Texas Holdem poker, it is really important to understand the rules first, as this can considerably increase your chances of winning. There are also some players in very rare cases, who are able to work out the odds of every card being dealt at any given point and this can be seen as card counting.

Some of the different hands

In Texas Hold'Em poker it is possible to win with a lot of different hands, so let's take a look at some of the ones where you might get lucky.

This refers to where you have any kind of pair, so you could be holding a 'seven' and you might have a 'seven' on the table. Each pair has a value assigned with twos being the lowest and Aces being the highest.

This is where you are simply holding a pair of cards and as a result, you are not able to make a hand with any of the cards that are on the table.

When you have three pairs, this refers to you having a pair in your hands as well as there being a card of the same number on the table.

This can win you a lot of Texas Hold'Em games and is where you have a pair in your hand, as well as two of the same number being on the table. If you are holding two Aces and then there are two Aces on the table, the chances of you winning are often quite good.

This is where you have five cards of the same suit, but not necessarily in order, both in your hand and on the table. Sometimes, only one card can be used to make a hand, if it is of a different suit. A flush is the lowest value hand that you can get.

When you have this hand in Texas Hold'Em, it is when you have consecutive cards of the same suit and is regarded as particularly high value.

Regarded as the best hand in Texas Hold'Em poker, this is where you have cards of the same suit that include a Jack, Queen, King and Ace and this is one of the rarest hands that you can get.

In the game of Texas Hold'Em Poker, there are many terms that you need to be familiar with in order to fully understand the game. Let's take a look at what these are.

Every game has what can be referred to as almost like an entry fee. The dealer has the big blind and the player to the left of the dealer has the small blind. Ultimately though, if a player wants to continue with the game once the hands are dealt, they must match the big blind. The turn of the dealer, then goes clockwise around the table, starting with the person sitting on the left. The value of the big and small blind increases every set amount of minutes.

Three of a kind

When a player has three of a kind it can refer to having three of the same number or 'three pairs'.

Four of a kind

This is when a player has four of the same number or card and is referred to as 'four pairs' or a 'full house'.

The limit is where there is a minimum betting limit for each round, based on what has been agreed so far, while the pot refers to what can be won, often also known as the 'final pot'.

This refers to the first draw on the river and can often be a huge difference-maker in terms of how the betting action goes from then on, for the players who are left in the game.

This is where a player attempts to gain an advantage over other players by essentially lying about how good their hand might be and as a result bets big in an attempt to get their opponents to withdraw from the game.

Quite simply, this is where a player withdraws from that particular game because they do not believe that they can win with their hand.

This is before any cards have been dealt in the middle of the table and players are still deciding about whether they want to stay in the game based on the cards that they have been dealt.

In Texas Hold'Em, there are a number of tips and strategies that can be applied to the game, which, while there are no guarantees to them, they might increase your chances of winning.

While some players can win based on sheer luck, especially online, it is highly advised that you first become familiar with the rules. One of the best ways to do this is to play the game on demo mode first which will give you the confidence to play for real money.

Do not gamble more than you can afford

Even if you feel pressured by the raise of a bet, if you are not confident about your hand, there is no shame in folding, especially if you cannot afford to match that particular bet.

Sometimes players can gamble a lot of money playing poker (especially in person) and this often has something to do with ego and a desire to impose their will over another person. However, it is important to be able to have a limit and walk away once you reach this.

Why is Texas Hold'Em the most popular?

In terms of poker games that are available, this is regarded as the most popular at online casinos, often because of the fact that it is played at major tournaments, that usually can be seen on television. Perhaps, also it is because it is the easiest poker variant to understand.

Is Texas HoldEm luck or skill?

Due to the fact that there is a lot of decision-making to be made in terms of how you bet, it can be argued that Texas Hold'Em is a game of skill. However, the actual outcome of the game cannot be influenced, because they are dealt completely at random.